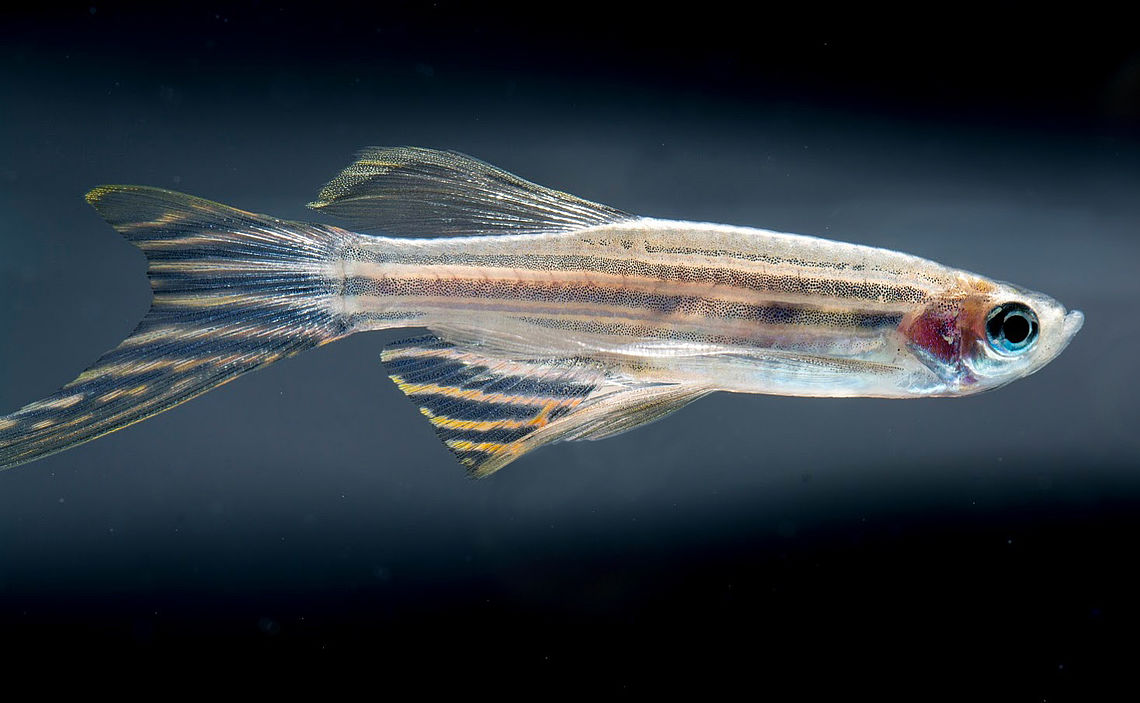 A zebrafish at the IMP.

IMP researchers observed the entire brains of zebrafish larvae in unprecedented resolution to reconstruct the neural basis of “left or right” choices in a behavioural experiment.

Some things we do appear almost automatic, such as opening the fridge when feeling hungry. Although such decisions do not seem to take much thought, they are in fact generated by millions of neurons and numerous interactions among several brain regions - a complex, dynamic system. Zebrafish have now opened an opportunity to observe decision-making processes in unprecedented temporal and spatial resolution.

Researchers from the labs of Alipasha Vaziri at The Rockefeller University and the Research Institute of Molecular Pathology (IMP), alongside collaborators, tracked the activity of individual neurons in the entire brain of zebrafish larvae to reconstruct the unfolding of neuronal events as the animals repeatedly made “left or right” choices.

The resulting frame-by-frame view of a decision in the making was so detailed that, ten seconds before the fish responded, the researchers could predict what their next move would be and when they would execute it. They reported their findings in the current issue of the journal Cell.

Understanding how a brain makes decisions involves tracking how neurons across multiple brain regions respond and cooperate. Scientists have long been stuck between two options: They can either closely observe the firing of only a subset of neurons, which limits their view of the whole picture, or look at the whole brain activity while averaging the data over multiple trials to reduce noise. Averaging, however, leads to loss of some of the details.

“We wanted to understand how decisions unfold on a trial-by-trial basis,” says Alipasha Vaziri, head of the Laboratory of Neurotechnology and Biophysics at The Rockefeller University and IMP Adjunct Investigator. To do so, the team paired advanced statistical methods with their recently developed imaging technique, light field microscopy, which enables simultaneous tracking of the activity of every neuron in the brains of zebrafish larvae.

But before subjecting the fish to experiments, the scientists had to teach them a new behaviour, one that was not merely reflexive, but goal-oriented. The goal, from the fish's perspective, was to get relief from heat. The researchers slightly warmed the water around the fish using a laser, switching off the laser only when the fish made a tail movement to the right. After about 15 repeats, the fish had mastered the trick: They responded to their warming surroundings about 20 seconds after the laser came on. About 80 percent of the time, the fish remembered to flip their tail in the correct direction.

During the interval after the laser was turned on and before the fish made a movement, the researchers tracked the activity state of about 5,000 of the most active neurons across the entire brain. They then identified which activity patterns reflected the brain sensing the heat or moving the tail, and which appeared decision related. Particularly, they found that about ten seconds before the fish made a movement, its brain patterns differed based on whether the fish was going to make a correct or an incorrect turn.

Having this information, the researchers could look at the brain state of any one little fish, and 80 percent of the time guess correctly what the fish was about to do: They were able to predict the specific time at which the animals would initiate the turn, and its direction, in each trial.

Having found which clusters of neurons corresponded to different aspects of the task, the researchers then mapped the neurons onto their anatomical regions. “This allowed us to see what brain regions were involved in what aspects of the task as the decision unfolded in each trial,” Vaziri says.

Several brain regions participated in transforming sensory information into decision and action, but one region stood out: the cerebellum. The rate of activity of neurons in this brain part determined the exact timing of the tail movement.

“This was surprising,” Vaziri says, adding that a few studies in recent years have pointed in the same direction. “I think we might find more generally that the cerebellum is involved in more cognitive brain functions than what we have traditionally thought.”