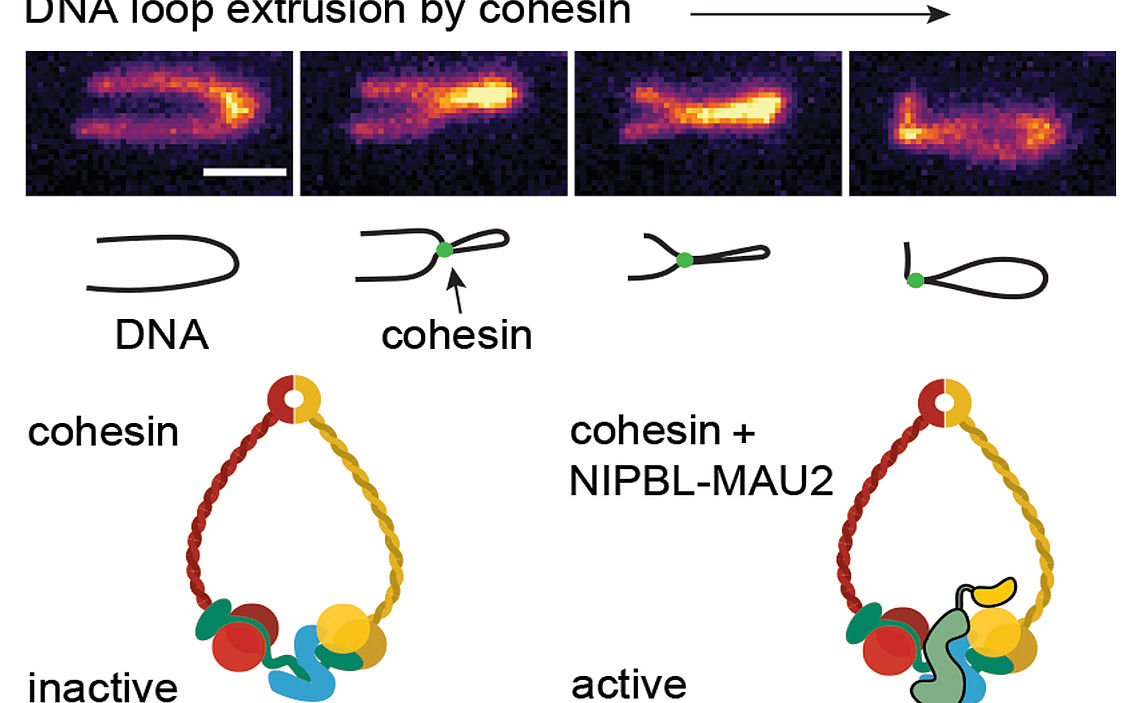 New insights into the process of DNA-looping change our view of how the genome is organised within cells. The discoveries by IMP-researchers elucidate a fundamental mechanism of life and settle a decade long scientific dispute.

To pack the genetic information, inscribed in roughly two metres of DNA, into its nucleus, a human cell must achieve the equivalent of fitting an 80-kilometre-long thread into a sphere the size of a soccer ball. Looking through his microscope back in 1882, German biologist Walther Flemming already glimpsed at how this trick is done. What he saw were loops of DNA-strands inside the nucleus of an egg-cell that reminded him of the brushes that were used at the time to clean gas lanterns - and so he named these structures lampbrush chromosomes, without an idea of what they were and which purpose they served.

It took many decades to identify the lampbrush chromosomes as strands of DNA neatly folded into loops, even longer to realise that DNA is folded into such structures in all cells and at all times, and it took until now to find out how this folding is done. In a paper published by the journal Science, researchers from Jan-Michael Peters’ lab at the Institute of Molecular Pathology (IMP) in Vienna demonstrate for the first time that a molecular machine actively and purposefully folds DNA via “loop extrusion” and thereby fulfils several important functions in the interphase cell.

That the process of looping DNA is neither random nor arbitrary is evident from how evolutionary ancient it is. All organisms do it, from bacteria to humans. The primeval function of the folding mechanism is still unknown, and we may never find out, but some vital tasks have been discovered in recent years. By looping DNA, distant regions on the large molecule are brought into close proximity and are able to interact. This physical contact plays an important role in gene regulation, where DNA segments called enhancers influence which genes are active. Looping is also essential for the ability of immune cells to produce a diverse array of antibodies.

An idea of how the loops are held in place emerged from work done by Kerstin Wendt, a former postdoc in the lab of Jan-Michael Peters at the IMP. In 2008 her results suggested that the protein-complex cohesin was doing the trick. This large molecule had been identified ten years prior in the lab of IMP-scientist Kim Nasmyth as the molecular glue that holds sister chromatids together during early mitosis, a discovery for which he was recently awarded the Breakthrough Prize. Conveniently ring-shaped, the cohesin complex was thought to clamp onto DNA like a carabiner.

For a long time, the folded state of DNA was regarded as a rather static configuration, with cohesin-molecules acting much like the rings on a curtain rod, sliding onto DNA without binding to it. An idea of how DNA looping might be achieved came from several scientists, including MIT physicist Leonid Mirny. He proposed that cohesin would initially form tiny loops of DNA which would grow bigger and bigger until cohesin would be stopped in this “extrusion” process by boundaries on the DNA which would define where the loops would be anchored. However, this loop extrusion hypothesis was too radically different from the established view of DNA being static and cohesin forming passive rings around it and was therefore received with scepticism by many biologists. It is thanks to the ingenuity and laborious experiments by Iain Davidson and his colleagues that the controversy can now be resolved.

The team involving Davidson, a senior postdoc in the Peters-lab at the IMP, was able to reconstitute cohesin function in a simplified system in vitro. Thus, he could watch how single cohesin molecules rapidly extruded single pieces of DNA into loops, exactly as Mirny and others had postulated. His findings, published online on 21 November 2019, are far reaching and change the way we perceive our genome in several different aspects:

Rather than being static, the genome is a highly dynamic structure.

“This is a real paradigm shift”, says IMP director Jan-Michael Peters. “Earlier observations already gave us some hints, but the work of Iain Davidson is now proof. In my scientific life, few other discoveries were as far-reaching as this one.”

The discoveries are expected to soon become textbook knowledge, as have other fundamental discoveries about our genome such as its duplication by semi-conservative DNA replication or its rearrangement by homologous recombination. For the IMP researchers, the next important question to address is how exactly cohesin binds to DNA, how it then moves the DNA so that it is folded into loops, and how this process is controlled. They have already shown that a protein complex called NIPBL-MAU2 is essential for cohesin’s motor function and not just for loading cohesin onto DNA, as was previously believed.

“We can now use our setup to zoom in further into the intricate molecular process of DNA looping”, says Iain Davidson, first author of the new paper. “Solving this mechanism may also help us to understand why certain human diseases are caused by mutations in the cohesin complex.”