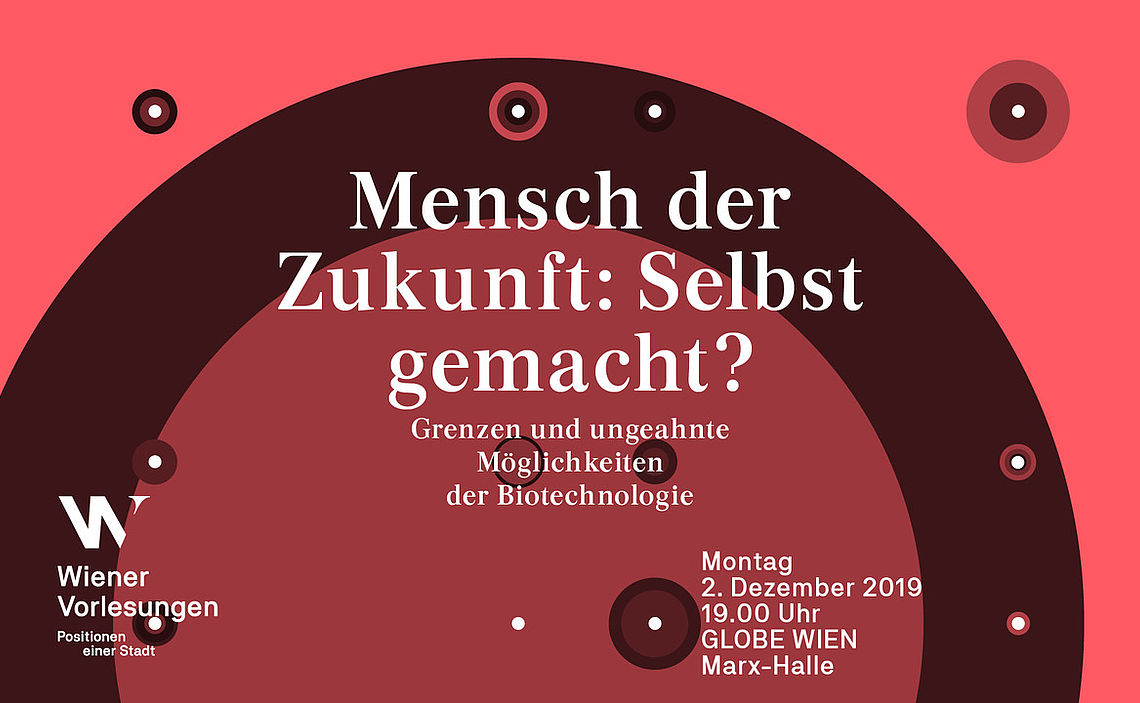 On December 2nd, IMBA scientific director Jürgen Knoblich, is part of the Vienna Lectures, promoting an interdisciplinary and public debate about limits vs chances of biotechnologies at the Globe Theater, next to the Vienna BioCenter

Genetically modified humans, lab grown organs, synthetic organisms: what until recently was regarded as utopian futuristic scenario, now suddenly seems feasible. Recent breakthrough discoveries led to a number of biotechnological innovations. But at the same time progress - at a fast advancing pace - leads to a number of questions and poses new societal challenges. How do we deal with these unprecedented possibilities? How can these technologies be used to cure diseases and meet the challenges of the future? Or will we just re-write our own DNA to become not only healthier, but also more beautiful, stronger and better? What are the limits of biotechnology?

Within the framework of the renowned public lecture series “Wiener Vorlesungen”, high-tech research meets science fiction. The lecture will take place in the picturesque setting of the Vienna Globe Theater, situated next to the Vienna BioCenter. Jürgen Knoblich, IMBA's Scientific Director, will talk about the recent innovations in biotechnology and how they have shaped i.e revolutionised basic biomedical research. Together with international best-selling science thriller author Marc Elsberg and Christiane Druml, Head of the Austrian Bioethics Commission, he will open an interactive debate with the public that concerns us all.

The event will be held in German. Tickets are free, but advance registration is required:

Marc Elsberg is famous for his international bestsellers BLACKOUT and ZERO, he also established himself as a master of the science thriller. With his novel "HELIX", Elsberg describes a fictional scenario inspired by the possibilities of modern biotechnology. His latest novel "GIER" currently leads the German bestseller lists.
Christiane Drumlholds the UNESCO Chair for Bioethics at the Medical University of Vienna and is Director of the Josephinum. In 2007 she was appointed President of the Austrian National Bioethics Commission. Christiane Druml was a member of UNESCO's International Bioethics Committee IBC from 2008 to 2015.
Jürgen Knoblichwas born in Memmingen, Germany. The biochemist and molecular biologist has been working at the Institute of Molecular Biotechnology (IMBA) in Vienna since 2005, and in 2018 he became scientific director. Knoblich is one of the pioneers in stem cell research. In 2013, his laboratory succeeded in cultivating human brain structures from stem cells in Petri dishes.

About the “Wiener Vorlesungen”
The Vienna Lectures are a contemporary and open access by the City of Vienna. Goal is to bridge science and society and to share knowledge and ideas emerging from research with the Viennese population of all ages and in a variety of venues.