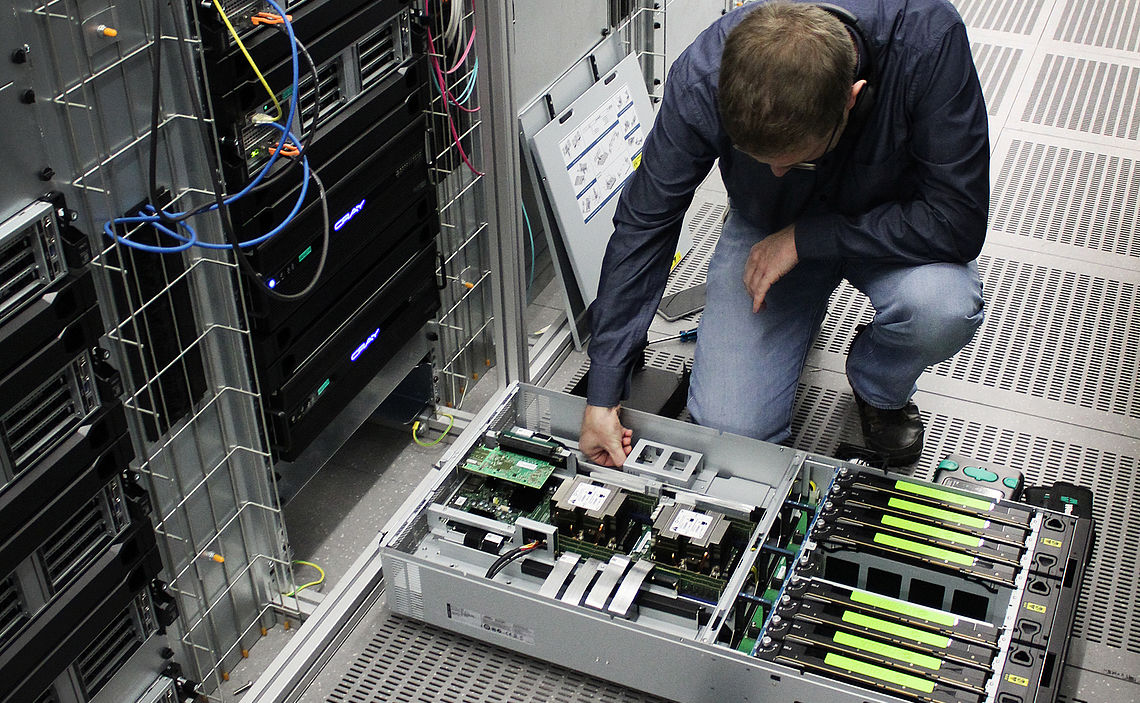 Not every cluster that is popping up these days is a bad thing: located right in the heart of the Vienna BioCenter, the newly installed Cloud Infrastructure Platform (CLIP) is the country’s largest non-university supercomputer cluster. It has embarked on a cross-disciplinary mission, serving scientists from fields as diverse as physics, maths, sound mechanics, space exploration – and of course plenty of life sciences.

Computing power is becoming increasingly important, with the life sciences field being no exception. Frequently used methods such as DNA sequencing, theoretical modelling and scientific visualisations of structures typically require the support of powerful processors.

A High-Performance Computing (HPC) team of Gregor-Mendel-Institute (GMI), Institute of High Energy Physics (HEPHY), Institute of Molecular Biotechnology (IMBA), Stefan Meyer Institute (SMI) – all institutes of the Austrian Academy of Sciences, ÖAW – and the Research Institute of Molecular Pathology (IMP), joined forces at the Vienna BioCenter to establish the cloud infrastructure platform “CLIP”, a supercomputer cluster that improves computing speed manyfold. Thanks to CLIP, every scientist who uses so-called “in silico” methods – complex simulations –has the opportunity of a one-of-a-kind supercomputer at her or his fingertips – no matter the location of their laboratory. This includes research fields ranging from geology to physics, mathematics and even aerospace research.

Ronny Zimmermann, Head of IT at IMP, IMBA and GMI and master of the machine, is proud of his team’s achievement: “When using CLIP, scientists can dramatically reduce the time necessary for calculations. A task that usually takes many hours, can be completed in just a few seconds – this is comparable to several hundred workstations working together as one unit. We are very excited to report that as of October of this year, we already have over 400 users employing CLIP as part of their scientific studies”.

CLIP boasts impressive numbers, with more than 200 servers running on over 7700 CPU cores (regular computers have between four to six) and 112 GPU cards. 14 Austrian institutions are already currently using CLIP services, including numerous research groups from the Vienna BioCenter itself, and the Austrian Academy of Sciences.

“CLIP is absolutely critical to the research done in our group! Most of our projects require major computational power, such as the analyses of massive sequencing datasets, polymer simulations of DNA structure, as well as theoretical models of DNA motors. These projects have very different computational demands - some need hundreds of weak computers, some - a few powerful ones, and some even need dedicated computational hardware (GPUs). Yet, CLIP provides a great solution for each of our projects!” says IMBA group leader Anton Goloborodko enthusiastically. “The thoughtful design of the cluster also addresses all potential bottlenecks that occur so often in high-performance computations, allowing us to focus on the science. I also love that we can use the same computational environment for prototyping and large-scale computations. All of this, of course, is thanks to our incredible IT team, who designed this cluster and provides rapid and flexible support to its users - it is a great privilege to work with them! Even though it's been only a year since our group has started, I already cannot imagine our work without CLIP.”

CLIP now launched its own website, where scientists can easily access services and retrieve their data: https://www.clip.science/.