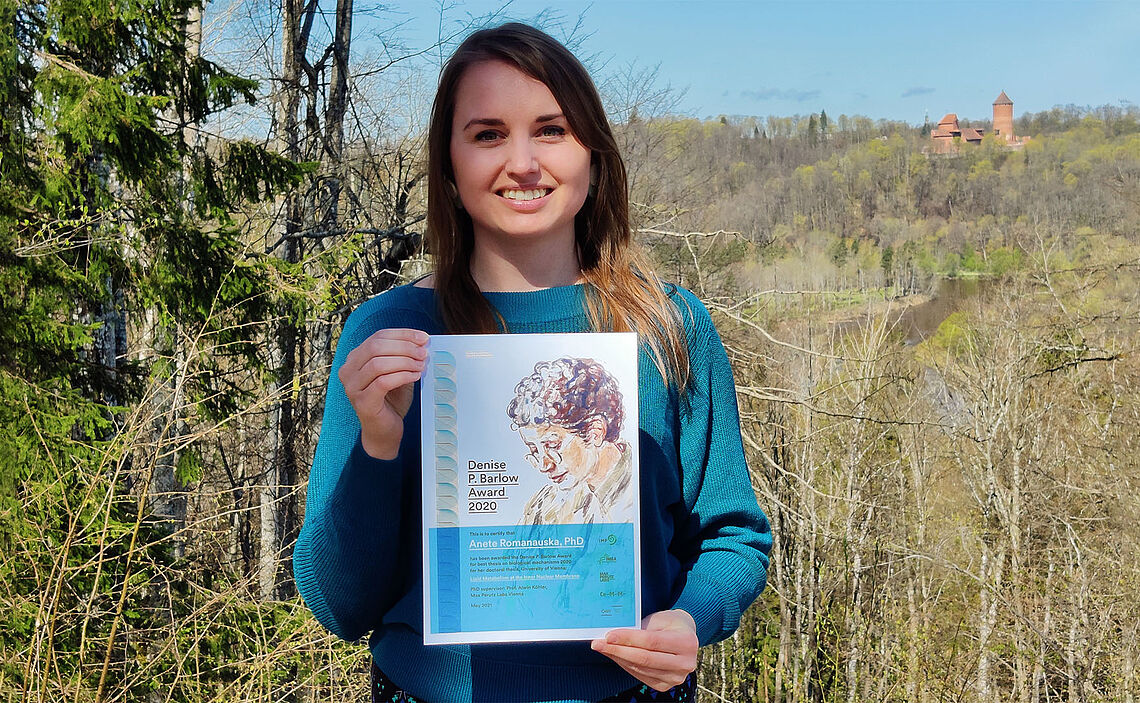 Postdoc Anete Romanauska from Köhler lab has been awarded the Denise M. Barlow Award for "Best Thesis on Biological Mechanisms". After the Weintraub Award and the Vienna BioCenter PhD Award this marks the third distinction for Anete’s PhD research on lipid metabolism in the nucleus. The prize is named after molecular biologist Denise P. Barlow and recognizes academic talent among the four research institutes she was associated with: The Max Perutz Labs, the Institute of Molecular Biotechnology (IMBA), the Research Institute of Molecular Pathology (IMP), and the Research Center for Molecular Medicine of the Austrian Academy of Sciences (CeMM). Its aim is to honor exceptional PhD work with an emphasis on novel biological mechanisms, something Denise P. Barlow was fond of.

“I am really honored and happy to receive this award. I want to thank the jury and organizers who have recognized our work”, says Anete Romanauska. Originally from Latvia she first joined the Köhler lab as a Vienna BioCenter Summer School student in 2015. During her subsequent PhD work in Alwin’s lab she made an unexcepted discovery, culminating in a two-author paper in Cell in 2018. She discovered lipid metabolism at the inner nuclear membrane, a region that was assumed to be metabolically passive. In her work, Anete showed that lipid turnover at the inner nuclear membrane can lead to the formation of a new type of energy storing organelle inside the nucleus, so called nuclear lipid droplets. This finding raises important questions about the functions of these droplets and the link between inner nuclear lipid metabolism and gene regulation. “I continue to work together with Alwin and currently we are investigating how membrane lipid properties affect membrane morphology and functionality”, Anete says.

The award is named in honor of Denise P. Barlow. Born in Yorkshire, UK, she was first trained as a nurse and later decided to enroll at the university to study Zoology, Physiology, and Biochemistry. After a PhD at Warwick University and postdoctoral research at the EMBL she came to Austria in 1988 to become the first female group leader at the newly established IMP. In 1991 she discovered the first imprinted gene, becoming a pioneer in this field. To the surprise of many, she found that DNA methylation is not on the silent allele but on the active allele, something that was contrary to expectations. In the course of her career, Denise was affiliated with four research institutions in Austria. She was a professor at the Max Perutz Labs (University of Vienna), a principal investigator at CeMM, and was associated with the IMBA. After her death in 2017 the four institutes established the award in her memory. The prize is endowed with € 5000, aiming to help young researchers transition from PhD student to Postdoctoral researcher.